The Authority is responsible for overseeing the strategic direction of BC Ferries in support of the public interest, appointing the Board of Directors of BC Ferries and for establishing compensation plans for the Directors and Executives of BC Ferries.

Safe, reliable and affordable coastal ferry service in British Columbia and a service that meets the needs of coastal communities and supports the public’s interest in environmental, economic and social objectives.

To oversee the strategic direction of BC Ferries in the public interest.

In 2003, the Coastal Ferry Act established a new governance model for coastal ferry services in British Columbia. The governance model transformed BC Ferries from a Crown corporation to a private company.

The governance model consists of four components. The B.C. Ferry Authority (the beneficial shareholder); BC Ferry Services Inc. (the service provider); BC Ferries Commissioner (an independent regulator); and the Coastal Ferry Services Contract (a 60 year contract between the Province of BC and BC Ferries).

In 2003, BC Ferries was transformed from a Crown Corporation to a private company. The BC Ferry Authority holds the single issued voting share of BC Ferries. The Authority’s role is to oversee the strategic direction of BC Ferries in support of the public interest, appoint directors to the BC Ferry Services Board and approve compensation plans for directors and executives of the company.

Under a 60-year contract with the Province of British Columbia, BC Ferries provides vehicle and passenger service on 25 regulated coastal routes in British Columbia. Known as the Coastal Ferry Services Contract, the contract stipulates service levels, routes and transportation fees.

BC Ferries is regulated by the BC Ferries Commissioner, an independent regulator. A primary role of the Commissioner is to regulate fares through price caps, ensuring the average level of fares does not increase above a set cap or ceiling. Within the price cap framework, BC Ferries decides on fares for individual routes.

The Commissioner regulates in the public interest and in accordance with several principles, including balancing the interests of ferry users, taxpayers and the financial sustainability of ferry operators. 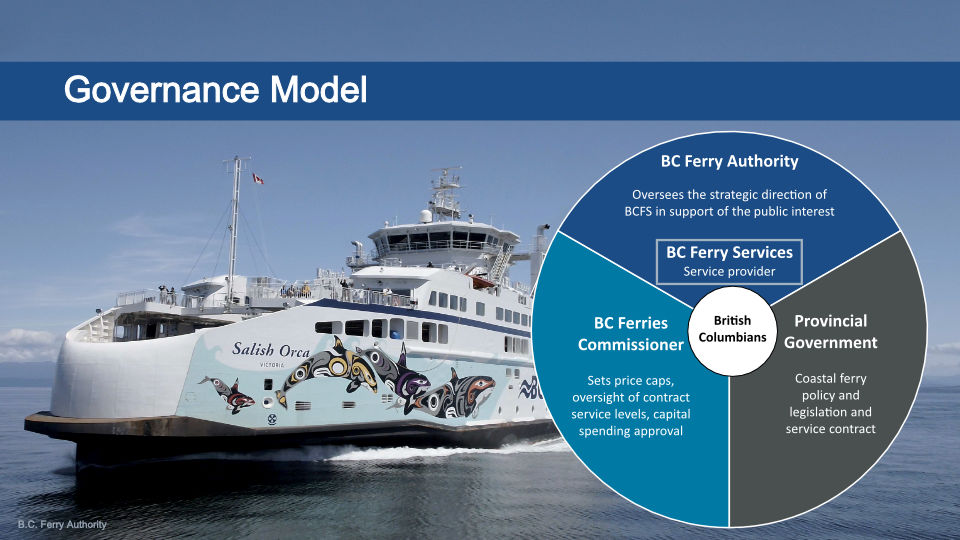 The Authority’s Board consists of nine directors.

The Chair is selected by the Board.